As discussed in class, the media enforces or reinforces any and every stereotype. There are obviously very sexist ads and products on the market, but there are others that seemingly try to promote the equality of the sexes. While these products are admirable, they are the ones that concern me the most. In my opinion, when companies try and promote “feminist” ads, they often just reinforce what they are trying to overcome. In other words, the exception proves the rule. The fact that a very few number of advertisers and companies try to “fight” these stereotypes proves that there is still a major problem with discrimination and sexism. Additionally, the fact that these products and ads that support equal rights are praised so much further proves the exception. These products should be expected not exceptional.

An example of this exception would be when JC Penny was pestered enough to stop selling a tshirt that said, “I’m too pretty to do homework so my brother has to do it for me.” Almost immediately after being posted online, people began protesting the shirt for obvious reasons: it suggests that girls should value beauty over brains and that boys are the ones that are supposed to be intellectual. It is great that consumers were so against this sexist tshirt, but again, this objection is an exception. Sexist products, even if they are more subtly sexist, can be seen virtually everywhere and usually people do not protest them. The consequence of the promotion of such products is the indirect reinforcement of what they are trying to prevent: sexism. 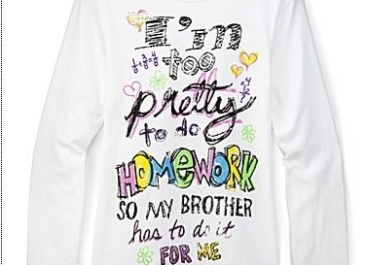 Perhaps our society is at the stage where the protest of sexist products should be celebrated, however hopefully we’ll get to the point where ads and products that support equal rights are not seen as exceptional.

A site for our digital interactions